Exhibition opening: “The Underground City: Bucharest, Between the Sacred and the Profane” – at the Filipescu-Cesianu House 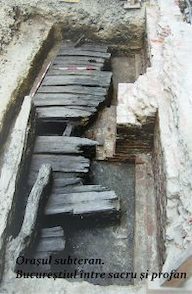 The Bucharest Municipality Museum cordially invites you to attend the opening of the exhibition “The Underground City: Bucharest, between the Sacred and the Profane” which will take place on Thursday, August 30th 2018, 6:00 PM, at the Filipescu-Cesianu House.

“Bucharest between the sacred and the profane” focuses on reconstructing the mediaeval Bucharest by showcasing items and findings produced by the archeological research carried out by the Bucharest Municipality Museum within the Historical Centre area. The research brought to light elements of the mediaeval, modern and contemporary structures.  Edifices and important inns, recorded in historical and cartographical documents, have been accurately located along with unique mediaeval structures. On this occasion, infrastructure elements have been thoroughly documented: areas of streets paved with wood or river stones, mediaeval pipes and sewage systems that offer new information on daily life in old Bucharest. The current exhibition will make use of images from the archeological excavations, graphical reconstructions and map overlays to assist the visitor in understanding the architecture and the inhabitable space. The entire visual display will offer a view of the underground city, overlapped with the modern capital, the sight of a buried but not forgotten time.

The excavation campaigns also revealed human skeletal remains which, in the case of some of the sites, represent the only source of information regarding a certain community. Differences in burial methods according to age, sex and social status, will be exemplified. Based on anthropological analysis results, a selection of skeletal remains with particular issues have been selected to illustrate aspects of a time when life expectancy was considerably lower due to military conflicts and rudimentary medical practices. During the mediaeval period, people were exposed to numerous infectious agents which caused diseases that left traces on the bones (ex. syphilis and tuberculosis). In addition to these, there were also disorders caused by food diets (such as cavities, tooth loss and abscesses) or physical efforts (osteoarthritis). The exhibition will display cases of individuals who suffered a violent death (the skeletons present damages caused by blunt weapons and fire weapons) or who passed away following medical complications caused by incorrectly applied treatments.

The cultural items which are to be displayed are part of the Bucharest Municipality Museum’s archeological collection and will include everyday items (dishware for serving, storing and cooking food), objects of personal use (personal care items, clothing and jewelry) and religious objects.

We aim to create a journey in the bygone times of the slums, inns and the 17th – 19th century churches, helping visitors to rediscover daily life from birth to death. The visual materials (plans, drawings and reconstructions) will offer viewers the possibility to understand the evolution of the capital’s urban fabric and the displayed artefacts will transport them back into the daily life of mediaeval Bucharest inhabitants, from the commoner to the member of the clergy and the elite.

Head of the Archeology Department