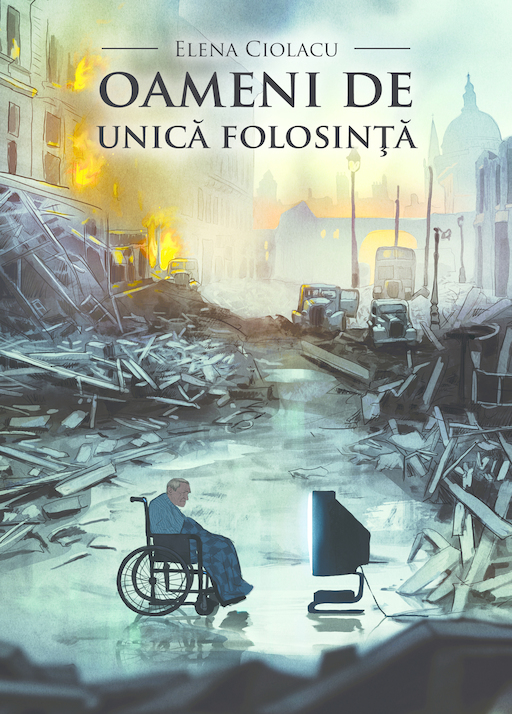 The book launch will take place at the Filipescu-Cesianu House with guest attendee Alexandru Ciubotariu, also known as Ciubi or the Square Cat. The Square Cat is a street-artist living and working in Bucharest, who creates comic strips, illustrates, paints, makes urban toys and animation. He coordinated a book on the history of Romanian comic strips and is also the founder of the Museum of Comic Strips in Bucharest.

“Disposable People” was conceived in 2014 in the UK and finished in 2015 in Romania. It is a story that deals with the theme of suffering, senescence in current society, family and fatherly love, but with s strong emphasis on the visual description of the Alzheimer’s disease. This book is probably the only visual representation of the Alzheimer’s disease from the perspective of the one living with it, and in order to understand and immerse herself in the reality of the afflicted, the author thoroughly research real cases of Alzheimer’s patients as well as the case of her own grandfather. This graphic novel started as part of a collaboration with a research centre in England and was going to be used as alternative teaching material for tutors and students at the Faculty of Health and Life Sciences at Coventry University. For various reasons, the collaboration didn’t take place anymore, but for the author the time she spent researching and understanding the subject was one that had a great impact on her and caused her to want to tell the story at any cost. “Disposable People” was published in a first edition in 2015 at Rost Publishing House and was also a finalist in the World Illustration Awards in 2016.

Award winning graphic-novel creator and 2D animator, Elena Ciolacu was born and raised in Râmnicu Vâlcea, where she followed her passion for art from a very young age. After graduation from high-school she studied Graphic Design at West University Timișoara, Illustration and Animation at Coventry University in the UK and recently graduated with an MA in Animation from the National University of Theatre and Film “I.L. Caragiale” in Bucharest. She debuted as graphic novel author during her studies in England with “A Story of Hope for the Bullied”, a visual narrative on the suffering of children and teenagers affected by bullying. After being published on-line the book received numerous praises and was also awarded two international prizes – 1st prize at the Creative Conscience Awards in 2013 and Curator’s Choice at NOISE International Festival in 2014. This first graphic novel was the turning point in Elena’s career, the one that determined her to continue her career in arts and visual storytelling. Apart from illustration and graphic novels, she also creates short 2D animations, writes short prose and hopes to one day learn to play the piano.