Public debate: “Ideas in Agora: Science and Ethnicity” – at the Filipescu – Cesianu House 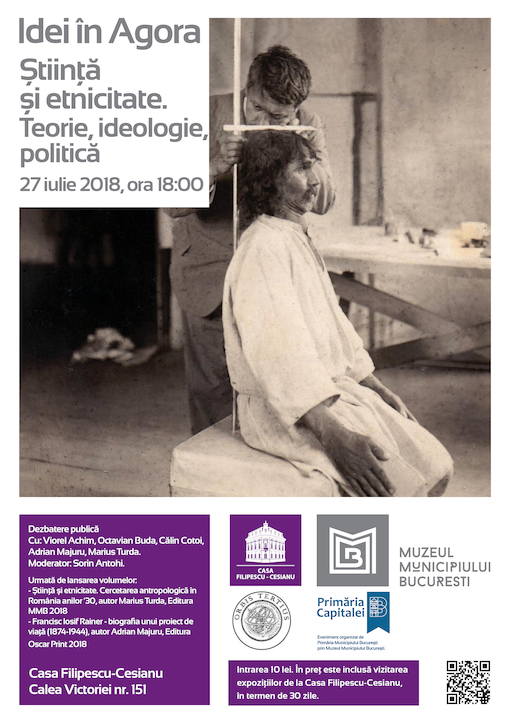 Public debate about at the ending of the exhibition Science and Ethnicity. Anthropologic Research in 1930s Romania.

Followed by the book-launch of:

The exhibition’s closing and the double book lauch are a great opportunity to have a public discussion on science and ethnicity, especially with regards to their theory, ideology and politics. In Romania and in its historical middleregion, the great project of the homogenous ethnic people was often considered more convincing – and more urgent, as everything had to be constantly (re)constructed – than defining the political nation. The classical phrasing of political philosophy, political body, was thus reconstructed as an organicist metaphor and gradually transformed in a biomedical, eugenic and racial ideal. In other words, the ethnic utopia, regressive by definition. Morphed into an anti-modern dystopia of a modern and growingly ambitious science, with promethean, magic and even godlike nuances. This evening we invited five of the most prominent Romanian experts on these themes, who are active on the international scene as well, with the hope (constant throughout the Ideas in Agora series) that they will contribute to syncronizing the Romanian debates with global ones.

Viorel Achim (born 1961) studied history at the University of Bucharest, has a PhD in History and is a researcher at the Romanian Academy Institute of History ”Nicolae Iorga” (a 1st degree scientific researcher starting from 2008). He started his career as a mediaevalist and early enough approached a variety of themes that have become a dominant in his research program: the history of gypsies, ethnic minorities in 1918-1948 Romania, population politics in 1940-1944 Romania, the Holocaust in Romania, with numerous books published on these topics.

Octavian Buda  (born 1966) holds a BA in Medicine and Philosophy and a PhD in Medical Sciences. He is a professor at the Faculty of Medicine of ”Carol Davila” University in Bucharest (History of Medicine department). A primary care psychiatrist at the National Institute of Forensic Medicine ”Mina Minovici”, has published numerous books on history of medicine, psychiatry, cultural anthropology, bioethics.

Călin Cotoi (born 1974) is a BA graduate of both Medicine and Sociology with a PhD in Philosophy. A professor in the Sociology Department at the University of Bucharest, he has authored numerous papers on themes such as nation and nationalism, history of social sciences, social history, political anthropology and environment history.

Adrian Majuru (born 1968) holds a BA in History and a PhD in Human Geography at the University of Bucharest with postdoctoral studies in Anthropology and the ”Francis Reiner” Anthropology Institute. He teaches Urban Anthropology at the MA and PhD courses of “Ion Mincu” University of Architecture and Urbanism. Starting with 2014, he manages the Bucharest Municipality Museum. Author of many published works dedicated especially to the interdisciplinary study of Bucharest (social history, human geography, urban anthropology, history of institutions and professions, daily life, mentalities, minority communities etc.).

Marius Turda (born 1973) holds a BA degree in History at the University of Bucharest and an MA and a PhD in History at Central European University. He teaches History of Central and Eastern European Biomedicine at Oxford Brookes University, where he also heads the Centre for Medical Humanities. Marius Turda is author of many papers, published in various countries, and of major research projects in eugenics, biomedicine, racism, bio-politics, national identities.

Sorin Antohi (born 1957) is a historian of ideas, essay writer and translator. In 2017 founded the Ideas in Agora series. More information at www.sorinantohi.org

Ideas in Agora is a project dedicated to the analysis of public spirit. Initiated by Sorin Antohi, who is also credited with conceiving, planning and hosting the events, the project is supported by Adrian Majuru and takes place through a partnership between the Bucharest Municipality Museum and Orbis Tertius Association/The Third World. The meetings take place in various formats (dialogues, conferences, colloquies, seminars, public debates etc.), and encourage dialogues on trends, movements, famous people, views of the world, theories and ideologies that agree, resonate or oppose each other.  The meetings are (almost every time) recorded and broadcasted through livestreaming, being afterwards archived at www.sorinantohi.org and https://www.youtube.com/channel/UCv5R2xEgA_M5nzwIUGl8kcQ.

Public and university intellectuals, politicians and businessmen, students, the entire educated public is therefore coming together in an endeavor to understand the world in which we live in, through the only means possible: critical debate of ideas.

During its first year (June 21st – June 24th 2018) a total of 26 meetings took place, among which an international conference, dialogues and conferences followed by discussions. The guests came mostly from Romania, but countries such as Armenia, France, Germany, Israel, Great Britain, the Republic of Moldova, USA, Turkey and Hungary were also represented. A summary of this first year can be found at https://www.societateamuzicala.ro/sorinantohi/wp-content/uploads/2018/06/Brosura-Un-an-de-Idei-in-Agora.pdf

The project continues. On June 23rd – 30th the event will take place as the “Ideas in Agora” Festival and will feature the launch of Ideas in Agora series of books.