Concert: “Up to Heaven” – at the Filipescu Cesianu House 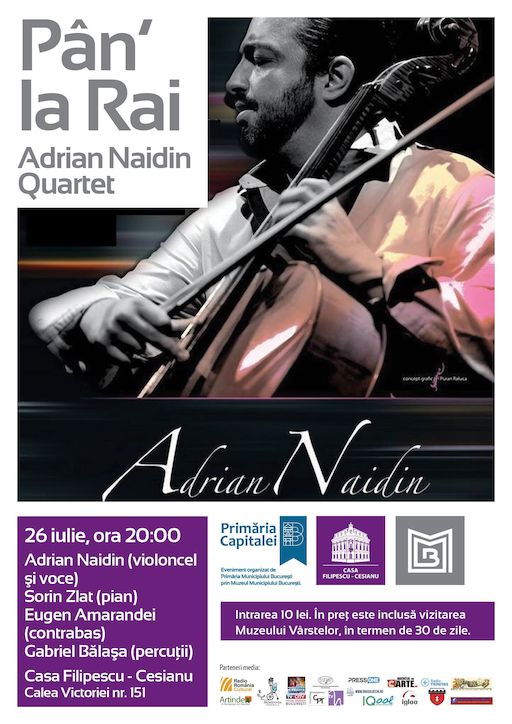 “Up to Heaven”, a top quality project, acclaimed on prestigious stages and included on the soundtrack of an Academy Award aspiring international film, is to be presented, in an exceptional edition, at the Filipescu-Cesianu House on Thursday, July 26th 2018, at 8:00 PM.

Ticket price: 10 lei. The ticket also grants access to visit the Museum of Ages for a period of 30 days.

One of the most valuable compositions ever imagined in the majestic spirit of Maria Tănase, “Up to Heaven” joyfully touches on traditional themes, exploring their depths and redeeming them with life in the most dynamic sounds of contemporary jazz. In a mixture of the traditional and the avant-garde, the technical and the nonconformist, cello player Adrian Naidin tests his own imagination in an incredible acoustic experiment, together with three other musicians with remarkable personalities and careers. Among them, pianist Sorin Zlat is the only Romanian to ever win an award at the most important jazz competition in the United States, The Great American Jazz Piano Competition, throughout its 30 years of prestigious history. They will be accompanied by Eugen Amarandei – one of the most technical and inspired Romanian contrabass players, and the exceptional percussionist Gabriel Bălașa, an inventive and unpredictable musician, put to the test in avant-garde formulas and unprecedented acoustic projects.

Adrian Naidin’s cello tells stories, it paints and recites verses, causes shivers to lift one’s soul up to Heaven or obstinately carries it to the abysses of Hell’s. Sometimes it sounds like an entire orchestra, and other times it only whispers or hums prayers. Charismatic and passionate, Adrian Naidin has seduced his audience with an incredible voice: an exceptional ambitus, a voice timbre like a Romanian ballad that rips your heart out, enriched with a sort of grandeur and control that can only be heard from the great opera singers. He once inspired Greek film director Mihalis Kakogiannis, while Latvian musician Mischa Maisky, known as “the cello’s Paganini”, names him as one of his best apprentices. His grace goes “Up to Heaven”, reminding from time to time of Maria, a bird-of-wonder numbed in silence, one that left behind the delicate contours of the Romanian song set free to fly. For music’s sake and for her sake, the artists carry a conversation preserving the essence of the traditional Romanian and sometimes interfering with their own musical experiences and encounters, in order to rediscover themselves in the modern, contemporary area, typical to European jazz. Admired and loved by a very devoted public, Adrian Naidin tells stories, either in an authentic ethnic inspired jazz-key, or giving new meanings to the compositions imagined by Bach, Brahms or Paganini.

Cello player Adrian Naidin is the revelation of the Romanian cultural space of the last years, after a series of successes that took him to the most prestigious stages, starting with the National Theatre in Bucharest and continuing with the most important theatres and philharmonics in the country. He strengthened his privileged place among elite musicians through recitals offered at exclusive cultural reunions, such as the UNITER Gala, his relevance confirmed through collaborations with first rank artists, such as Horațiu Mălăele, Ion Caramitru or Daniela Nane.

The official release of the “Up to Heaven” project was attended by directors and technicians who worked on the independent project “The Necessary Death of Charlie Countryman” – a passion project of American actor Shia LaBeof and an Academy Award aspiring film in 2014. Seduced by Little Mary from Gorj, infatuated with the fitful rhythm of Ciuleandra and caressed by the hummed Doina, producers from Voltage Production and Bona Fide Productions made the offer and then included the songs on the soundtrack of “The Necessary Death of Charlie Countryman”.