The Arch of Triumph, the National Museum of Art of Romania, the Suțu Palace and the Romanian Olympic and Sports Comitee will be lighted in red in support of people with mental disabilities 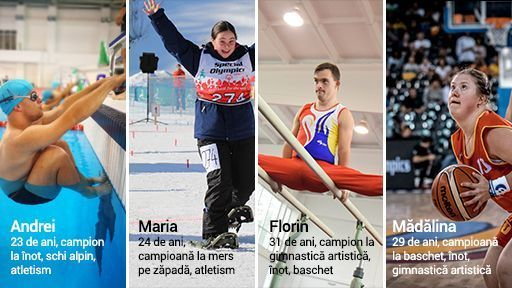 The Arch of Triumph, the National Museum of Art of Romania, the Suțu Palace and the Romanian Olympic and Sports Comitee will be lighted in red in support of people with mental disabilities.

As a sign of social inclusion of people with mental disabilties, four of Bucharest’s iconic buildings , the Arch of Triumph, the National Museum of Art of Romania, the Suțu Palace and the Romanian Olympic Comitee, will be illuminated in red on Friday, July 20th, from 21:00 – 24:00. The event marks 50 years since the Special Olympics movement started fighting on a global level to eliminate discrimination of people with mental disabilities and to create an inclusive society.

The Special Olympics sportives will highlight the social inclusion message through a human chain inside the courtyard of COSR (No. 20A, Mărăști Boulevard) on Friday, July 20th, at 21:30.

Throughout Friday, a clip will run on the 12 screens of the Cocor shopping center, showcasing some of the Special Olympics athletes who are national and international champions at gymnastics, basketball and swimming.

“We were happy to see so much support for our campaign to raise awareness on the need to accept and integrate people with mental disabilities, no matter the country that they are from. The lighting of buildings as a sign of inclusion is a symbol in support of the Special Olympics mission which must carry on”, said Timothy Shriver, president of Special Olympics International.

Together with the four buildings in Bucharest, 170 other edifices in the world will take part in the “Illumination for Inclusion” initiative. The red color is a symbol of tolerance, respect and celebration of differences between people. Some of these representative places in the world are the Niagara Falls in the USA and Canada, the Angel of Independence in Mexico City and the “Cube of Water” underwater park in Beijing. The full list of edifices which are to be illuminated on the 20th of July is available here.

“Illumination for Inclusion” is part of the anniversary Special Olympics movement which will take place in Chicago on July 17th – 21st 2018. Chicago is the city that hosted the first Summer Special Olympics in 1968. The event will be attended by athletes, coaches and supporters from all over the world.

In Romania the anniversary will be marked by a dedicated event taking place on Sunday, July 22nd, 18:00, at the National University of Physical Education and Sport in Bucharest. Three of the Special Olympics champions will play in a demonstrative game with three Olympic champions: runner Doina Melinte, judoka Alina Dumitru and rower Viorica Susanu Chermes. Doina Melinte holds four world records in athletics, her most spectacular results being 4’17″14/100 at the one mile trial in the Easte Rutherford running competition (USA) in 1990, a record broken only after 26 years. During her 17 years of practice she won all possible trophees and medals, among which gold at 800m and silver at 1500m, at the 1984 Los Angeles Olympics. Alina Dumitru is the first Romanian sportswoman to win olympic gold in judo, 48Kg category, at the 2008 Beijing Olympic Games. In 2012, she won silver at the London Olympic Games. Furthermore, she is a multiple European champion and winner of three bronze medals at the world championships. Viorica Susanu Chermes is a multiple gold winner at the Olympic Games in Sydney (2000), Athens (2004) and Beijing (2008) where she also won a bronze medal. At the World Championships she won five gold, three silver and three bronz medals.

The Special Olympics athletes, winners of multiple medals at local and international gymnastics competitions, will come together with the gymnasts of the 6th District Euritmic Club in a performance of merged dance, acrobatics and gymnastics. At the same time, some of them will share their champion stories at local and regional events and at the national and international competitions they are taking part in. Last but not least, one of the event’s hosts will be Șerban Nicolescu (36 years old), the first employee with Down Syndrom in Romania.

The event is sponsored by PROFI hypermarkets and United Way Romania Foundation through the project “Social Performance through Sport – A Medal for Life”. The event’s partners are Hervis Sport, Herbalife Nutrition, a multinational company of food products that aims to make the world a healthier and happier place, the Romanian Association for Illumination, the Romanian Olympic and Sports Comitee, Marbo Trade and the National University of Physical Education and Sport.

*The Arch of Triumph benefited of non-refundable financing through the 2007 – 2013 Regional Operational Program, Priority Ax 5 – Durable Developing and Tourism Promotion, Major Field of Intervention 5.1 – Durable Restauration and Capitalization of Cultural Heritage, as well as creating/modernizing connected infrastructures for consolidation and restauration.

Special Olympics helps people with mental disabilities to be accepted and involved as active members of the communities they belong to, in order to create a respected and inclusive society for all. Using sport as a catalyst, together with collateral programs in health and education, the Special Olympics fights against passivity, injustice and intolerance. In Romania, from 2003 to present, Special Olympics has helped over 27 000 children, young people and adults with mental disabilities to be active citizens of their community.

Information about Special Olympics Romania can be found on the official website (www.specialolympics.ro) and the official Facebook page (www.facebook.com/SpecialOlympicsRomania).

About the PROFI hypermarkets chain

PROFI is the most geographically extended modern hypermarkets chain in the country with a yet unequalled rhythm of growth in Romania. In 2016, no less than 134 shops were inaugurated and 195 other were added in 2017, so that 2018 started with more than 695 shops open in 379 localities in all counties of Romania and in Bucharest. This progress will continue so that each of the coming years will see the opening of a number of shops at least equal to the inaugurations from the year before. (www.profi.ro)