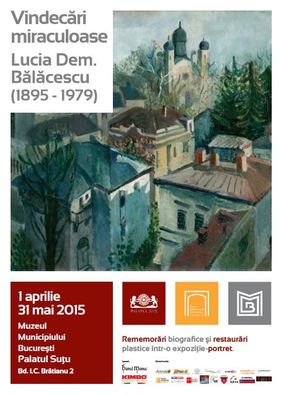 The third exhibition in the Miraculous Healings series is dedicated to painter Lucia Dem. Bălăcescu on the 120th anniversy since her birth, and the representative work restored to the exhibitional circuit after the “healing” process of restauration, is „Landscape from Bucharest”.  The painting is joined by five other works belonging to the Bucharest Pinacotheque’s collection.

Lucia Dem. Bălăcescu studied at the Bucharest School of Belle Arte from 1913 to 1918 and afterwards, up until 1922, specialized in Paris at various private academies that promoted modernist art. Upon her return to Romania, she joined the „Women Painters Association” as well as the groups „Contimporanul” and „New Art”, which promoted a daring aesthetic that opposed traditionalism. In this context the artist imposed a style and theme that would establish her name on the Romanian modernism scene at a time when she used mostly water techniques. Painting with gouache and watercoloros she depicted historical parodies in a comical and yet naive style. These works established her fame in the exhibitions of the time:  „A Wedding in 1930”, boyars chatting in an old interior, imagined characters dressed in 1880 clothes etc., made up a fabulous universe, charmingly narrated, that she never abandoned no matter the motif, genre or technique that she approached. This storytelling direction, painted in bright and spontaneous colors, represented her exhuberant fantasy fed by family stories, and also her funny taste for (self)irnoy.

Throughout her life, the artist exhibited in numerous personal and group shows (such as the Official Salon) both in Romania and abroad. She was also a reputed illustrator and some of her best works adorn the pages of „The Book of Toys” and „Why do you bother me, wind” by Tudor Arghezi, „The student who failed his exam” by Ion Minulescu, „A harbour in the East” by Radu Tudoran and Boccaccio’s „The Decameron”. Her illustration work for Baudelaire’s poems was awarded by the Romanian Academy in 1939.

She debuted as a journalist in 1937 at the newspaper „Timpul” and she signed articles on art, culture or travel journals for Le Moment, Bis, Vremea and Astra. She also left behind two significant memoirs: the first one, „In the New Paradise” (1942), describes her traumatizing experience of the Soviet invasion of Bessarabia, when the artist was hospitalized at the Bugaz sanatory next to Cetatea Albă; the second one, “Literary Revelations” (1979), offers a more detached perspective on her life.

During the communist regime she didn’t change her style as much as she changed her technique – painting mostly in oils – but she submitted to the rigors of socialist realism through specific subjects: Captain Costache (the people’s executioner, 1848), Hangerli’s Trick, The Old and the New Worlds (1848) etc. She was a member of the artistic group U.S.A.Z. “The Flame” (1948), The Democrat Women’s Exhibition (1949), The Regional Painting Exhibition, The Annual Graphic Art Exhibition (1957) etc.

After 1966 especially, she returned to the subjects that established her during the inter-war period and with her old zest and exoticism painted portraits, genre paintings, domestic scenes, still natures etc. In 1974 she was awarded the Ion Andreescu prize of the S.R.R. Academy. She died on November 5th 1979.