THEMATIC EXHIBITION AT THE FREDERICK AND CECILIA CUȚESCU STORCK MUSEUM 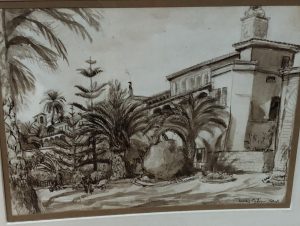 Cecilia Cuțescu Storck became famous shortly after finishing her studies in Munchen and Paris. Her first personal exhibition took place in the very capital of France, in a gallery on Lafitte street, a place known for its large number of modern art galleries. After her Parisian success, Cecilia came back to her country and in 1906 opened her first personal show in Romania, at the Romanian Atheneum. On this occasion she exhibited a series of paintings and drawings created during her travels from when she was a student.

The artist considered the journey to be an urgent need to learn from the new directions of European art and explicitly said: “The need to freshen-up and the wish to expand my understanding and to taste all of the new art manifestations that the West had to offer, pushed me to travel in order to study.” Her enthusiasm to perfect herself and learn from the great Western art accompanied her throughout her whole life: „Every time I was given an important commission, at the start or the end, I would rush to see the great art wonders in Italy and France”.

Having lived for a few years in Paris, Cecilia Cuțescu Storck considered France her second home. Later travels through various parts of France became an important source of inspiration for her. Even one of her drawings made in ink and ink washes, which will feature in the exhibition, depicts a landscape in Carcassonne. Fascinated with urban architecture, the painter oscillated between sporadic captures of the architectural elements and complete, almost photographic representations of the urban landscape.

In Lisbon and Toledo, Cecilia Cuțescu Storck created a series of urban landscapes of almost topographic perfection. In 1943, in Portugal’s capital, she stopped in Rossio Square (or Praca de Dom Pedro IV) and drew it from various angles, fascinated with the sight of a cathedral’s ruins. On the other hand, in Palma de Mallorca, she was inspired by the palm tree gardens and through her light strokes transports the viewer in a heavenly nature.

During her many European trips, Cecilia Cuțescu Storck also stopped in Fiesole, close to Florence: „Walking down the roads of beautiful Italy, I arrived on the cypress tree path leading from Florence to Fiesole, I visited the solitary home of the painter Böcklin and reached the peak where laid the Church built by St. Francis himself”.

Her journeys could not have missed Istanbul with its oriental charm. The exhibition will feature a magnificent drawing, a panorama illustrating the Golden Horn with the tall silhouettes of some impressive cypress trees in the foreground.

At Balcic, where the Storck family was often travelling to and where they had even built an elegant house, the artist was in a familiar millieu, inspired by the exotic landscape and the picturesque villages: „I would start walking toward the Tartar village, which was shinning in the heat of the sun, had no trees and was close to the cemetery, but had an archaic beauty”. Besides, the artist mentioned in her book, The Frescoe of a Life, that: „I owe this beautiful landscape of Balcic the inspiration I got for four painting exhibitions”.

In fact, for Cecilia Cuțescu Storck all her travels were an important source of re-freshening her artistic creation and an opportunity to explore new cultural spaces in a European context which became more and more cosmopolitan in the first half of the 20th century.