Exhibition opening: “Art and Ambience in Bucharest – First Half of the 20th Century” – at the Suțu Palace 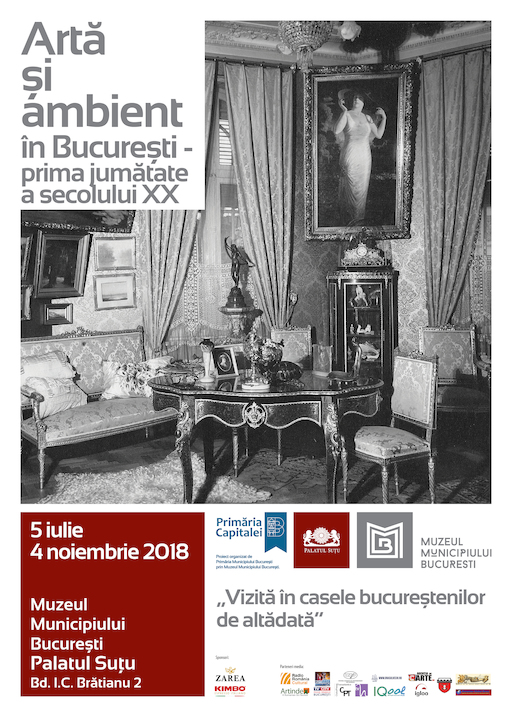 The Bucharest Municipality Museum cordially invites you to attend the opening of the exhibition “Art and Ambience in Bucharest – First Half of the 20th Century” which will take place at the Suțu Palace on Thursday, July 5th 2018, 6:00 PM.

The exhibition will remain open until November 4th 2018.

The second half of the 19th century and the first half of the 20th century mark deep changes in the ambience of Bucharest with regards to both the city and the houses interiors. If at the start of the century the furniture was predominantly Oriental, defined by its lack of large pieces and multitude of sofas with cushions and oriental carpets, after 1850 it starts to borrow the Western look dominated by styles such as Biedermayer, Louis-Philippe and Napoleon III. At the same time, we come across a combination of Oriental and Western items, but they often display the European classical styles in all their beauty and unmixed. One must not forget that for the Romanian Principalities this century represents their entrance in the European space, a time of deep changes started at the end of the Phanariote rule and marking the economic, social and urbanistic scenes, as well as people’s mentality.

Discovering Bucharest, in order to recreate its image, can be done through the structures and city-planning elements that are kept by interior ambiance, with furniture, small decorative objects, objects of daily use or works of art. Bucharest was known as the Little Paris, especially due to its French inspired architecture from La Belle Époque.

The bourgeois style itself materialized in the Biedermayer style of interior decoration in the German countries, a style particular to the forty-eighter’s generation that will adorn the Bucharest’s elite salons during the romantic era. A notable fact is that, although furniture is more lasting and outlives clothing styles and even their owners, the costume is the one that generally determines the emergences of new chair and armchair designs by contouring new human ideals and determining new proportions. This way, at the beginning of the 18th century in England, because of the new fashion of bouffant trousers, the chairs in the Parliament had to be widened. A century later, the Louis XV armchairs had the arms moved back to fit ladies’s skirts supported on wooden frames. The Biedermayer furniture defined a pleasant, comfortable ambiance, designed primarily for city family life. The living-room furniture came first, with its round table, chairs and sofas that barely reminded of the empire forms, as the rigid lines were replace with round contours and the black ebony wood with the cheaper, lighter brown walnut and oak woods, with no bronze appliques either. Illustrating again the molding of chair design onto the human form and costume, the Biedermayer back of the chair imitated the roundness of the shoulders and the slim waist required by fashion. Towards 1840, the repertoire of ornaments grew with new sculpted floral-themed appliques and with prefabricated ornaments made out of wood and sometimes even metal (brass).

One of the most popular interior pieces of the time was the secrétaire. With its folding door it could be turned into a writing desk, while its many drawers, niches and secret compartments hid the owners “treasures” from intrusive eyes.

The cabinetmakers’ preference for functionality is expressed in the design of commodes, the most used and sought after pieces. The Biedermayer commode is a practical furniture with drawers and shorter than the well-known French “chiffonier”.

The impressive large round table in the living-room, with drawers on its belt and a massive countertop placed on a robust baluster-looking column, was to be found in most of the rooms.

Together with the chairs, armchairs and the little tables, the sofa represents, no matter the place where it was placed, the center point of the entire room and the symbol of wealth and comfort.

The typical wardrobe of this era is characterized by simplicity, its distinctive element being the panels with various profiles decorating the swinging doors. This is the piece that stood the test of time better than any other, being particularly appreciated even today.

The interior design was completed with curtains, white mousseline drapery and applique ornaments that also gave the space a touch of intimacy.

Similar to furniture, the silverware testifies to the same standards of quality of craftsmanship. In most of the cases, they are not decorated and are notable through their masterly finishing and the beautiful play of lights and shadows on the amply molded surfaces. The 19th century, all throughout, took on elements of all the different styles; candlesticks, tableware (cutlery, sets, goblets), personal care items (boxes, flasks) show both Biedermayer elements as well as Renaissance (lion claws, bas relief or ronde-bosse characters) and Louis XVI elements (ribbons, laurels, pearled motifs).

The chairs belong to the most diverse categories, some copying old models down to the fine details, while others, completely covered with fabric and fringes, are designed to offer greater comfort. Full of originality and charm are the “indiscret” sofas, with three seats and a fan-shaped back, as wells as the “confident” sofas, with two seats and an s-shaped back. They will be joined by the “crapaud” designs – short and upholstered, with gondola-shaped backs –, the puffs – round stools, upholstered and with fringe masked legs –, and the “bornes” with their round bench look and a central elevated pillar. And, as once the Louis XV armchairs had their arms adjusted to accommodate the ladies’ skirts, special stools were now invented to accommodate the crinoline dresses. On top of that, the shawl was still being worn both indoors and outdoors.

At the end of the 19th century and beginning of the 20th century, the 1900 Art asserted itself. Art Nouveau decorating pieces – furniture, lamps, jewelry, accessories – are joined by the Neo-Romanian style which will determine the production of folk-inspired decorative art. As a result, the interior design of the time showcases both well-known styles and sculpted furniture as well as traditional towels and rugs.

The start of the modernist period determines the appearance of new geometrical volumes in interior architecture. The new furniture, designed with straight lines and wood or metal, and the interior accessories, were meant for industrial, serialized production. This production will coexist with luxury Art Deco items during the time that we showcase.